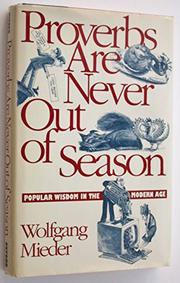 PROVERBS ARE NEVER OUT OF SEASON

Popular Wisdom in the Modern Age

In a series of engaging essays, Mieder (German and Russian/University of Vermont; Tradition and Innovation in Folk Literature, 1987) concludes that technological society needs—and generates—proverbs as much as did primitive agrarian societies. After describing the formal complexity of proverbs—their dependence on sound, syntax, and context—Mieder (ed. of The Dictionary of American Proverbs, 1991) traces their origins to the biblical, classical, and medieval traditions; their movement from individuals to communities; the role they play in cultural literacy; and what they reveal about cultural values. In a chapter on the proverb ``Early to bed and early to rise...,'' the author shows how a proverb changed from wisdom (as intended by its creator, Ben Franklin) to parody (Groucho Marx), and, in a chapter on ``Don't throw the baby out with the bath water,'' he shows how that proverb originated in Germany in 1512, migrated to England, and was popularized by G.B. Shaw. Discussing contemporary proverbs, Mieder explains how ``A picture is worth a thousand words,'' coined in 1921 by an American advertising executive, migrated to Europe. Some proverbs, such as ``A woman's place is in the house,'' have lost their meaning, while others, such as ``The early bird catches the worm,'' reveal the values of the community that uses them, or- -as in ``Practice makes perfect''—help to acculturate individuals. And proverbs can also be misused, the author shows, as in Nazi Germany. Chapters on medical proverbs (``An apple a day...'') and on Vermont's regional proverbs (``Mud thrown is ground lost'') are especially insightful, fresh, and amusing. Throughout, it's the essential fun of proverbs that Mieder conveys—as well as their literal charm. A memorable and learned book by an author who can explain as well as discover. (Thirty-six halftones, four line drawings—not seen)