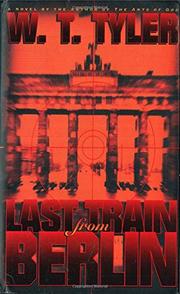 From ex-foreign service officer Tyler (The Lion and the Jackal, 1988, etc., etc.): an engrossing cold war drama with a big international cast of characters, and with settings ranging from Washington, D.C., to Paris and Berlin. When Kevin ``Kip'' Corkery, a junior CIA officer and former US Navy Lieutenant, is appointed ``action officer'' to investigate the sudden disappearance of one of the agency's senior career officers, Frank Dudley, he takes on the task with an active independence and fresh competence that surprise his less than forthcoming department heads and superiors. Corkery's pursuit of Dudley and of the truth about his suspect loyalties to other intelligence organizations- -those of both friend and foe, including KGB, MI5, And FBI—is complicated by the shadowy presence of Russian Major Alexi Andreyev and his own former comrades and Western contacts, as well as by the named organizations' inherent distrust of each other. The unfolding story of double and triple twists is revealed through events as experienced in turn by Dudley, Andreyev, and Corkery: ``Every conspiratorial bureaucracy views its failure as its antagonist's victory,'' suggests one narrator, ``whether the State Department in combat with the Pentagon, the Pentagon with the Office of Management and Budget, CIA with the FBI, or Washington with Moscow.'' With aplomb, the various agencies stretch their legs to chase their enemies—and their own tails. Expert and entertaining forays into the outdated mind-sets of early cold war counterintelligence—and a vintage spy story in the tradition of Greene or le CarrÇ.