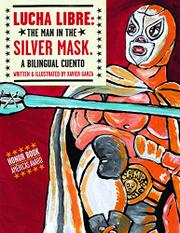 LUCHA LIBRE: THE MAN IN THE SILVER MASK

Carlitos and his father go to the arena in Mexico City to watch a bout of “lucha libre” (professional wrestling) with Carlitos's Uncle Vicente. Although this tale is set a half century ago, the wrestlers are divided, just like now, into bad guys (los rudos) and good guys (los técnicos), and the audience loves booing los rudos and cheering for los técnicos. Young readers will shiver along with Carlitos at the frightening costumes and manners of the bad guys—El Cucuy (the Boogeyman), the Evil Caveman and the Vampire—and thrill to the heroes—the Mighty Bull, the Masked Rooster and Carlitos’s favorite, the Man in the Silver Mask. While Carlitos (and younger readers) may not figure out why Vicente misses the bout, older readers will realize who the Man in the Silver Mask really is. Garza's illustrations are oversized, wildly colored and presented in bold outlines, recalling both Mexican folk art and the rowdy spirit of the stylized sport. They are sure to draw in every wrestling fan under the age of 10. His afterword gives a brief history of Mexican wrestling and especially El Santo—The Saint—its most popular hero and the original man in the silver mask. (Picture book. 6-9)