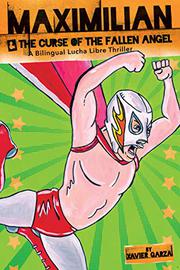 MAXIMILIAN AND THE CURSE OF THE FALLEN ANGEL

Wedding bells loom when Tio Rodolfo declares that he’s marrying a former flame and fellow luchadora named Maya, aka the Silver Star. His tio’s announcement worries Max. Will the Guardian Angel continue to wrestle? When Max’s fears prove true and Tio Rodolfo reveals that he’s ready to abandon the luchador lifestyle, a new problem arises. Who will be the new Guardian Angel? Barely about to enter high school and still in training, Max knows he’s not quite there yet, but an unexpected challenger to the throne—his little brother, Robertito—startles the budding luchador. As the Guardian Angel prepares for his final match against the Fallen Angel of Catemaco, an up-and-coming lucha libre fiend, Max wrestles with his hero’s legacy as well as his own destiny. Though the format for this tale remains the same as in earlier series outings (English text on the left page, Crosthwaite’s Spanish translation on the right page, with illustrations sprinkled in), Garza shows a new mastery of his characters—all Mexican—and fictional world in this latest installment. Apart from Max’s continued growth, each character shines, no matter how small an appearance they may make. In the end, what readers get is an assured, joyous story full of lucha libre antics and poignant familial bonding.