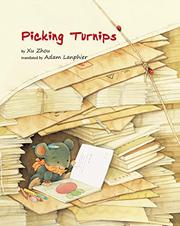 A little mouse’s “uncle’s uncle’s uncle” is the source of a lightly fractured version of Tolstoy’s “The Gigantic Turnip.”

As the familiar story unfolds, an alternative is presented by some mice tunneling beneath the large turnip that the usual characters—a white-haired grandfather and grandmother, a grandson (in the original, a granddaughter), a puppy, a kitten, and one lone mouse—are trying to pull out of the ground. The soft watercolor paintings have been “adjusted” by Adobe Photoshop. The full-color paintings on white paper with a ripped bottom edge telling the traditional story have been “taped” at the top of rough brown paper with irregular side edges, within which the mouse story plays out. The human characters are light-skinned, and Grandson has black hair. Beneath, the mice and two moles in the tunnel are mostly painted in shades of brown, except for the gray mouse (the “uncle’s uncle’s uncle”) who leaves his friends to help the humans up top. The text is very simple, but the English punch line (“Let’s juice this baby!”) feels jarringly contemporary. A Simplified Chinese edition of the story publishes simultaneously, with simplified characters and transliterated text directly above the characters as well as a closing glossary. Thumbnails of the spreads and the English text are reproduced in the backmatter in a design that does not do justice to the parallel stories.

An ambitious but not entirely successful reboot of a familiar favorite.