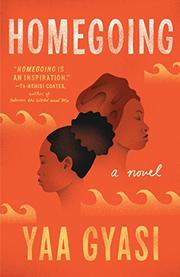 A novel of sharply drawn character studies immersed in more than 250 hard, transformative years in the African-American diaspora.

Gyasi’s debut novel opens in the mid-1700s in what is now Ghana, as tribal rivalries are exploited by British and Dutch colonists and slave traders. The daughter of one tribal leader marries a British man for financial expediency, then learns that the “castle” he governs is a holding dungeon for slaves. (When she asks what’s held there, she’s told “cargo.”) The narrative soon alternates chapters between the Ghanans and their American descendants up through the present day. On either side of the Atlantic, the tale is often one of racism, degradation, and loss: a slave on an Alabama plantation is whipped “until the blood on the ground is high enough to bathe a baby”; a freedman in Baltimore fears being sent back South with the passage of the Fugitive Slave Act; a Ghanan woman is driven mad from the abuse of a missionary and her husband’s injury in a tribal war; a woman in Harlem is increasingly distanced from (and then humiliated by) her husband, who passes as white. Gyasi is a deeply empathetic writer, and each of the novel’s 14 chapters is a savvy character portrait that reveals the impact of racism from multiple perspectives. It lacks the sweep that its premise implies, though: while the characters share a bloodline, and a gold-flecked stone appears throughout the book as a symbolic connector, the novel is more a well-made linked story collection than a complex epic. Yet Gyasi plainly has the talent to pull that off: “I will be my own nation,” one woman tells a British suitor early on, and the author understands both the necessity of that defiance and how hard it is to follow through on it.

A promising debut that’s awake to emotional, political, and cultural tensions across time and continents.