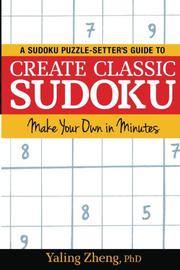 Make Your Own in Minutes

Readers tired of solving sudoku puzzles can try creating them with this fun debut how-to manual.

Zheng’s doctoral research at the University of Nebraska-Lincoln in 2011 involved programming computers to make sudoku puzzles. In this book, she distills the craft into step-by-step procedures that readers can use to make the familiar grids. In a sudoku game, each of the numbers one through nine appears once in each row, column, and three-by-three “box.” The author’s simple process starts with a top row of randomly arranged numbers; readers can then create subsequent rows by “shifting” numbers from the previous row in particular ways. (The procedure also allows readers to build the grid by using columns or boxes instead of rows.) Zheng then provides other rules to help readers make the grid more random. She doesn’t go into the mathematics behind her procedures; she just lays them out as a practical recipe, with lucid, illustrative examples that make the process so easy that complete novices will be able to make sudoku grids in a few minutes. Then comes the hard part—figuring out which squares to erase so that the grid becomes a challenging but still solvable puzzle. Erase too few and the puzzle is too easy; erase too many and it lacks a single, unique solution. To that end, Zheng prescribes methods for deciding which squares to omit, using two elementary tests to determine whether players will be able to deduce the numbers from the remaining squares. The author notes that the procedure amounts to solving the puzzle in reverse. Creating a puzzle is therefore as difficult as solving one, perhaps more so, because there’s no gratifying endpoint—one simply erases squares until the puzzle becomes hard to figure out. Thus, while sudoku-solving climaxes in a triumphant solution, sudoku-making simply grinds to a halt. Still, Zheng’s guide offers readers a vigorous mental workout.

An engrossing primer on sudoku as seen from the creator’s side.