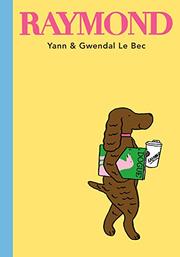 A dog explores a career in journalism, then decides there are better things (for a dog) to do.

It all begins when Raymond, a happy dog lavished with TLC, has “a rather BIG thought for a dog” and decides to join his human family at the dinner table. This behavior naturally leads to “cappuchino-and-cupcake Saturdays at the café,” a successful job interview at DOGUE magazine, and, after a spell as “rover-ing reporter,” celebrity status on the Dog News channel. The cartoon-style illustrations surround Raymond, a chocolate-brown spaniel, with diverse casts of urban dogs and people—the latter led by his mixed-race human clan—as he goes from interviews and editorial meetings to frantic pre-broadcast makeup sessions. Ultimately, though, it all becomes “a bit too much,” and after rediscovering the pleasures of chasing a ball, having his belly scratched, and getting his paws dirty with digging, he concludes that work can wait on the sort of “dog’s life” that combines such play with cozy get-togethers on the sofa.

What makes it all worthwhile? Getting “your ears scratched in just the right place.” (Picture book. 5-8)