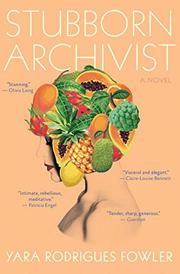 A novel about a Brazilian British woman takes a fresh approach to bicultural identity.

Readers of Rodrigues Fowler’s debut might feel an early sense of confusion. Memoir? Poetry? Creative nonfiction? There are elements of all in this captivating, unconventional novel. Like the author, the unnamed protagonist was raised in a Brazilian British household. Many familiar themes appear. The woman is perceived as foreign in South London, the only place she's called home, while she's deemed not quite Brazilian by her extended family. The story is animated through intimate details that conjure the sights, the sounds, and the smells of each event: As the protagonist visits Brazil or cooks with her grandmother, Rodrigues Fowler evokes the taste of Brazilian food, the music of Portuguese. But the story is also told between the lines, as when Isadora, the main character’s mother, recalls her English in-laws learning she was going to marry their son. A pleasant visit ended with Isadora kissing and hugging her future mother-in-law goodbye, as is her tradition, and her soon-to-be husband doing the same, later revealing, “You know, that is the first time I have hugged my mother in fifteen years.” It seems gimmicky to leave the main character unnamed, but by the end, readers will feel they know her from the many stories shared about her family and her interactions, over time, with her mother, grandmother, aunt, female friends, the men and women she loves, and her response to those confused or attracted to her “foreignness.” As the novel ends, the protagonist has become comfortable in her skin, embracing all the facets of who she is, realizing the strength of her Brazilian heritage with a full-bodied, heartfelt embrace.

This novel seeps with the sweet satisfaction of staking a place in the world.