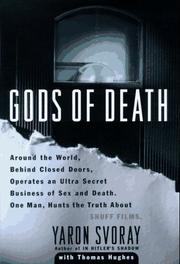 Around the World, Behind Closed Doors, Operates an Ultra-Secret Business of Sex and Death. One Man Hunts the Truth About Snuff Films.

by Yaron Svoray with Thomas Hughes

A former investigator of neo-Nazis turns his detective skills and underworld contacts to the almost equally sordid and furtive world of violent pornography in this incredible globe-trotting odyssey. Snuff films—whose filming involves people actually being sexually tortured, raped, and murdered—have long been the stuff of legend and apocrypha. To this day, the FBI claims that there is no such thing. But Svoray (In Hitler's Shadow, 1994) seems to have found otherwise. Beginning with a contact in Israel, he travels, using several different cover stories and aliases, to Bangkok, New York, Los Angeles, London, Germany, and Paris, before ending up in Serbia, following an ever-winding, often elusive trail. His goal, ostensibly, is to procure a copy of a snuff film, proof final and positive. But he is really more interested in seeing where his leads go, what new and dangerous pornographers, con men, and mobsters they turn up. Along the way he views a number of snuff films and even arranges a viewing in Paris of such a film for the actor Robert De Niro (deep in method acting research). Then there is the Connecticut mansion where wealthy pillars of the community pay $1,500 each for the privilege of watching a snuff film. In Bosnia, Svoray finds himself negotiating for a snuff film (it turns out to contain a horrific record of Bosnian Serb atrocities, including rapes and murders) while NATO planes fly bombing runs overhead. Back in Belgrade, Svoray is arrested and the tape, his only proof, confiscated. If this is all true, it's an amazing story. There are so many incidents, so much danger, one has to wonder how Svoray managed to survive. Certainly, given this material, his penchant for melodrama and dramatic flourishes is completely superfluous. What would be gawky, ill-plotted, and rambling as fiction, as fact becomes an unbelievably compelling journey to the depths of human depravity.