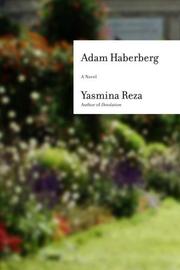 Half a day in the life of a failed Parisian novelist.

Reza (Desolation, 2002, etc.) places her title character in the “poorhouse position” on a bench at the Jardin des Plantes menagerie. In this zoo story, the morose 47-year-old Adam meets an old high-school acquaintance, Marie-Thérèse. A seller of cheap souvenirs, Marie invites the “artiste” to her flat in a distant suburb. As she drives and chatters about her job and long-lost schoolmates, Adam thinks about his eye problems and defunct career, and he thinks about his TV-watching children and unsympathetic wife, and he thinks some more. He also makes calls on his cell phone and occasionally responds to Marie, who was once infatuated with him. She cooks an impromptu dinner for Adam, after which he returns to Paris, vowing to write about triviality: “give an account of what doesn’t change, or changes very little, or changes in an invisible, secretly cruel way.” Told through Adam’s point of view in an unsegmented present-tense tumble of dialogue and rumination, the novel initially seems to be a tour-de-force of Adam’s newly valued quotidian reality—a Nicholson Baker knock-off—but is ultimately a tour de farce, a writer’s mockery of a writer’s vain ambitions, intellectual pretensions and emotional narcissism.

One would not want to spend more than half a day with Adam Haberberg.