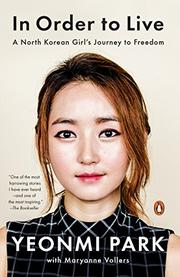 IN ORDER TO LIVE

by Yeonmi Park with Maryanne Vollers

The latest in an increasing number of narratives of escape from North Korea.

Human rights activist Park, who fled North Korea with her mother in 2007 at age 13 and eventually made it to South Korea two years later after a harrowing ordeal, recognized that in order to be “completely free,” she had to confront the truth of her past. It is an ugly, shameful story of being sold with her mother into slave marriages by Chinese brokers, and although she at first tried to hide the painful details when blending into South Korean society, she realized how her survival story could inspire others. Moreover, her sister had also escaped earlier and had vanished into China for years, prompting the author to go public with her story in the hope of finding her sister. The trauma underlying Park’s story begins in her hometown of Hyesan, North Korea, just across the Yalu River from China. There, the state-supported economy had collapsed, leaving the people to fend for themselves. The author survived the famine of the 1990s thanks to the black-market trading of her enterprising parents. In an oppressed, heavily censored society where one is not allowed to think for oneself and “even the birds and mice can hear you whisper,” the police hounded the family and eventually nabbed the father for smuggling. Rumors that North Korean women could find jobs in China lured the women to agree to be smuggled across the river, where rape and hideous exploitation awaited from the hands of a network of Chinese human traffickers. In a fluid narrative facilitated by co-author Vollers (Lone Wolf: Eric Rudolph: Murder, Myth, and the Pursuit of an American Outlaw, 2006, etc.), Park offers poignant details of life in both North Korea and South Korea, where the refugees were largely regarded as losers and failures before they were even given a chance.

An eloquent, wrenchingly honest work that vividly represents the plight of many North Koreans.