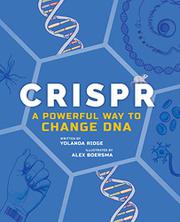 A provocative report on world-changing developments promised by a dawning breakthrough in biotechnology.

Ridge first goes over the ins and outs of chromosomes and genomes, then explains how certain clusters of “palindromic repeats” found in the DNA of single-celled creatures can be employed to edit with precision any cell’s genetic “instruction manual.” Though just missing the onset of the COVID-19 pandemic, she goes on to explore the technique’s current and potential uses and misuses. The former include creating better medicines, cures for cancer and other systemic diseases, new plant varieties, and better livestock; the latter, scrambling ecological balances, cooking up frightening bioweapons, and “Playing God” with human germlines to make designer babies. In general she comes down on the positive side (if for no other reason than that it’s too late to get the cat back into the bag) but doesn’t skimp on laying out complications and quandaries for readers to chew over in formulating their own views. She leavens the hefty informational load as best she can (“The genetic similarity between a human and a banana is 60%”), and Boersma supplies a generous array of staid but lucid diagrams, schematics, and infographics in support. Though it is marketed as a book for readers 14 and up, both graphic design and complexity of language seem to suit it better for middle schoolers.

Science literally on the cutting edge, offering prospects of wonder and terror in equal measure.