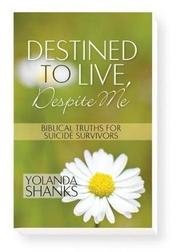 DESTINED TO LIVE, DESPITE ME

A suicide survivor shares her conviction that the Christian faith can overcome a suicidal past.

As a pregnant 14-year-old, Shanks felt she had nowhere to turn and attempted to end her life—but she survived. The ensuing kindness of her sister and of an older Christian woman who took her in led Shanks to realize that life was worth living. Looking back on her ordeal nearly three decades later, Shanks credits God for saving her life, changing her direction and sustaining her through the years. This book is an attempt to share her sense of hope and joy in the wake of near-tragedy. Shanks’ intended audience is suicide survivors—those who have attempted suicide and those who have considered it—and she addresses them from the heart. Chapter headings are drawn from Shanks’ suicidal thoughts, such as “No one truly cares about me!” and “Life is too hard, and suicide is my only escape!” Working from each of these desperate mindsets, Shanks discusses what brings a person to such a point and then provides a Christian answer to the problem, drawing extensively upon scripture. Shanks’ work is, in many ways, an evangelical primer on the Christian faith for the unbeliever or new believer, including an explanation of the Trinity, the basics of salvation theology and an exposition on the importance and role of scripture. The book’s trajectory shows readers that, through faith, they can make sense of, and rebuild, their lives. Some readers may be taken aback by the unapologetically evangelical tenor of the book, while others will be drawn to it through the sincerity of the author. Shanks is completely committed to her faith and to presenting Christianity to the reader in an evangelical manner. Though often unpolished, her writing is accessible and genuine in tenor.

A commendable guide for finding meaning after considering suicide—from the heart of a survivor.