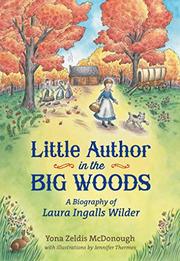 LITTLE AUTHOR IN THE BIG WOODS

A Biography of Laura Ingalls Wilder

This condensation of the long, peripatetic life of Laura Ingalls Wilder will intrigue fans of the Little House series.

After scant pages of prologue and the early life of Wilder’s mother, the text begins a straightforward chronology with a mind-numbing parade of temporary homes, hardships and triumphs, and many, many descriptions of building construction. (No wonder Ma always seemed so tired.) Those who have read the Little House series will recognize names, places and incidents that went straight from Wilder’s memory into her novels—more so than most works of fiction, as the text notes. (Readers will eventually learn the reason: Wilder initially expected to publish an autobiography for adults). Quotes from Wilder are interspersed with facts about her life, and a few facts are noted as different from her fiction. Ironically, the text sometimes reads like a lifeless summary of episodes that sparkle in the novels. However, there is a noteworthy emphasis on literacy—especially for girls—and on the values of three generations of “strong, smart women.” Also, the biography extends Wilder’s life far beyond the chronological boundaries of her books and into her writing career, relationship with daughter Rose and final years. The illustrations are lovely pencil drawings that pay homage to Garth Williams’ work while maintaining originality.

Less mesmerizing than Wilder’s prose but similar in its simple sentences that convey big ideas.