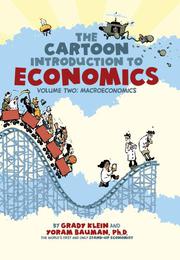 THE CARTOON INTRODUCTION TO ECONOMICS

A lighthearted effort to make the dismal science less dismal, though too often about as funny as a Yakov Smirnoff set.

Economics is all about managing scarce resources, money being one of them. Macroeconomics, the big-picture aspect of economics, “has two big goals,” writes Bauman (billed as the world’s “only stand-up economist”)—namely, to establish means by which living standards increase over time, which is where old Adam Smith’s invisible hand comes in, and to “explain how economies grow…and why economies collapse,” which, considering the collapsing state of things, makes the field both useful and timely. The “holy grail” of macroeconomics, Bauman writes, is “how to get economies to grow without crashing,” which would seem to defy the laws of thermodynamics—and there the fun begins, for on one hand you have Milton Friedman, on the other John Maynard Keynes, and any number of disparate and often contentious approaches to making everyone rich without, in the end, making everyone destitute. There’s a lot of ground that Bauman and artist Klein have to cover, so much that sometimes useful concepts—Joseph Schumpeter’s suggestive theory of “creative destruction,” for instance—get only a panel or two. Even so, Bauman hits his targets with pleasing accuracy. For example, he and Klein get, in just a few pages, what it has taken other writers whole volumes to express on the matter of the Keynesian view of the causes of cyclical unemployment. Bauman is also pleasingly subversive without overtly seeming to be so: He gives a lively, sardonic view of how inflation serves as a de facto means of wage cutting in the age-old war of supply and demand. The cartoons are ample, but the yucks few, particularly when Bauman recycles the old saw, beloved of Reagan and his Reaganomic acolytes: “In a recession, you lose your job…in a depression, I lose mine.” Which goes to show, it is called the dismal science for a reason.

Laugh-a-minute or not, an accessible introduction to a densely complex subject.