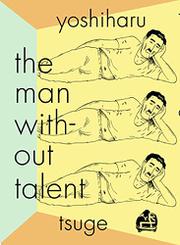 THE MAN WITHOUT TALENT

This first English-language edition of a work by influential Japanese comic-book artist Tsuge follows an impoverished, embittered comic-book artist whose unconventional search for riches keeps him in league with schemers at the fringes of society—much to his wife’s angst and young son’s distress.

Whether it’s selling stones he finds near his home, repairing and reselling cameras bought from a junk store, or even carrying people on his back across a shallow river, Sukezō Sukegawa will do just about anything for money—except create the comic books for which he has received critical acclaim. He pridefully resents the lack of money in comic books, though he fails to sell any stones either. Sukezō’s pursuits introduce him to shady characters, such as the alcoholic head of an “art stone” association and the man’s libidinous wife, and to outsiders such as a homeless man whose uncanny connection to birds allows him to effortlessly gather exquisite specimens for sale. Though Sukezō’s wife resents his inability to make money—and the costs associated with his offbeat vocations—Suzekō provides for the family in his own, unbalanced way, as when he combines a stone-hunting trip to the countryside with a hiking trip for wife and son. The trip is a disaster: Sukezō’s asthmatic son melts down over the train schedule, fecal matter likely slips into the family’s noodles, and the three of them lie by a river and wryly contemplate suicide. Tsuge’s raw and profound work is equal parts pathos and poetry, streaked with irony and ribaldry. His lines are beautifully clean and wonderfully expressive, the pages sometimes presenting expertly cartoonish simplicity and other times almost photorealistic detail. Tsuge has a soft spot for outsiders yet is acutely aware of how they can end up dead in a field somewhere, covered in their own filth.