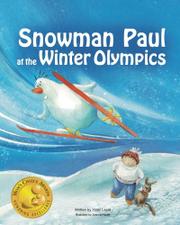 Snowman Paul and the Winter Olympics

Snowman Paul wants to try out for the Winter Olympics, but his human friend Dan says that he’s too old. Paul boards a bus and heads to the Winter Olympics anyway. “What could I do?” Dan asks as he tags along to watch his “swell-headed-pile-of-snow” pal compete. The story flows in simple verse and intuitive rhymes: “I knew my Paul was very clever, / Perhaps the smartest snowman ever.” The dynamic, full-spread illustrations of Paul’s winter sporting events and the pacing of the story will grab and keep young children’s attention. The illustrations are more than just pretty pictures: the subtle shades of blue and gray in the snow droplets make the action scenes look lifelike and energetic, as if the snow is spilling across the pages. They complement the story, sweeping readers along as Paul seeks his Olympic dream. One single sentence is broken across eight pages of Olympic action: “Curling, / Snowboard, / The luge-run, / Guess who, each time, was / Number One?” To Dan’s surprise, Paul stacks up gold medals like Michael Phelps. But this is no simple follow-your-dreams book—the mood is triumphant only until Dan suspects Paul might be cheating. At first Paul sulks and pouts. “ ‘No way,’ snapped Paul. ‘That isn’t true!’ ” At last, he and Dan look for a way to make things right. Instead of an overdone morality lesson, this tale gently criticizes the extreme culture of winning and cheating, as well as temperamental professional athletes. Unfortunately, even though the story is set at the Olympics, the premier intercultural sporting event in the world, it doesn’t include an illustration of a single person who’s clearly from another country, and almost every person in the book appears to be white. As a result, the book misses the chance to add some genuine diversity.

A celebration of winter and competition that will likely appeal to children who’ve dreamed of Olympic glory—or of a big, friendly snowman coming to life.