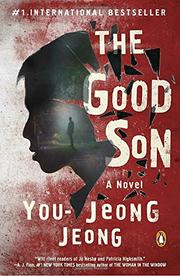 A young man desperately tries to fill in gaps in his memory when he realizes he may have brutally murdered his own mother.

Twenty-five-year-old Yu-jin lives in a sparkling modern apartment with his mother, has an adopted brother with whom he’s close, and he’s waiting to hear if he’s been accepted into law school. One morning, he wakes covered in blood, “clots of the stuff” hanging off his clothes. He follows the trail of gore to find his mother lying at the bottom of the stairs with her throat cut. He explores the house, hoping for more clues as to what happened, and is surprised to find his late father’s straight razor covered in blood in his room. Could he have killed his own mother? It sure seems that way, even if he can’t remember doing it, and the fact that he hasn’t been taking his anti-seizure medication doesn’t help. Yu-jin narrates, telling a compelling, disturbing tale as he tries to piece together the events that might have led to his mother’s death. Yu-jin’s mom may not have had his best interests at heart. She made him stop swimming competitively—the only thing he really loved—because she claimed to fear he’d have a seizure in the water, and she nags him incessantly, always insisting she know his whereabouts. After his brother and father died 16 years ago, she adopted Hae-jin and has favored him over Yu-jin since. Yu-jin even confesses to following young women around at night, noting that frightening them is an addiction that he must feed. When a woman’s body washes up nearby, one can’t help but suspect Yu-jin. He doesn’t help his case by admitting that he lies often. Pressure steadily mounts as Yu-jin’s world, and mind, unravels. Bestselling Korean author Jeong slowly winds readers up with taut, high-tension wire, slowly letting it play out as the police inevitably come calling and Yu-jin begins to uncover shocking secrets about himself, his mother, and his past.

A creepy, insidious, blood-drenched tale in which nothing is quite what it seems.