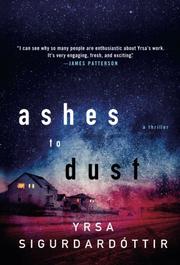 A trip down a flight of stairs leads to an unspeakable discovery with appalling consequences for Reykjavík attorney Thóra Gudmundsdóttir and her latest client.

No one has been able to enter the house in which Markús Magnússon had been brought up since a volcanic eruption in Iceland’s Westmann Islands in 1973. Now that an archeological project is excavating several of the houses buried under lava and ash, Markús has engaged Thóra to accompany him and the project’s representative as he searches the house for personal articles his family might have left behind in their hurried evacuation. But he insists on going down to the basement alone, and when he calls out to her, she joins him to find a horrifying scene: three long-dead bodies and the severed head of a fourth. The story Markús tells is as shaky as he is. Alda Thorgeirsdóttir, the nurse he’d carried a torch for when they were in school together, had asked him to retrieve a box she’d asked him to get rid of just before the eruption—a box he’d left in the basement without ever opening it to reveal the head. Unfortunately for Markús, Alda’s in no position to confirm this wild tale because someone’s just killed her in a particularly fiendish way. So after the police lock up Markús for the 34-year-old murders, Thóra (Last Rituals, 2007, etc.) makes the rounds of three generations of locals searching for exculpatory evidence and alternate suspects. The former is hard to find, but the latter are plentiful in a world in which the sins of the fathers are visited without mercy on the children.

Buried under all the volcanic ash, false trails and endless recriminations is a puzzle whose grim solution is worthy of Stieg Larsson.