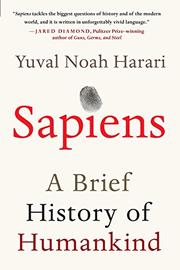 A Brief History of Humankind

Harari (History/Hebrew Univ. of Jerusalem) provides an immersion into the important revolutions that shaped world history: cognitive, agricultural and scientific. The book was originally published in Israel in 2011 and became a best-seller.

There is enormous gratification in reading books of this nature, an encyclopedic approach from a well-versed scholar who is concise but eloquent, both skeptical and opinionated, and open enough to entertain competing points of view. As Harari firmly believes, history hinges on stories: some stories for understanding, others prompting people to act cooperatively toward common goals. Of course, these stories—“ ‘fictions,’ ‘social constructs’ or ‘imagined realities’ ”—can be humble or evil, inclusive or self-serving, but they hold the power of belief. Harari doesn’t avoid the distant past, when humans “were insignificant animals with no more impact on their environment than gorillas, fireflies or jellyfish,” but he is a skeptic and rightfully relies on specific source material to support his arguments—though he is happy to offer conjectures. Harari launches fully into his story with the cognitive revolution, when our brains were rewired, now more intelligent and creative, with language, gossip and myths to fashion the stories that, from politicians to priests to sorcerers, serve to convince people of certain ideas and beliefs. The agricultural revolution (“lives generally more difficult and less satisfying than those of foragers”) comes next and firmly establishes the intersubjectivity of imagined orders: hierarchies, money, religion, gender issues, “communication network[s] linking the subjective consciousness of many individuals.” Throughout, the author revels in the chaos of history. He discusses the good and bad of empires and science, suggests that modern economic history comes down to a single word (“growth”), rues the loss of familial and societal safety nets, and continues to find wonder in the concept that “the keys to happiness are in the hands of our biochemical system.”

The great debates of history aired out with satisfying vigor.