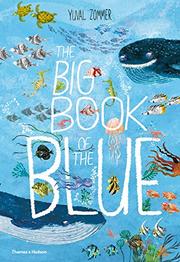 THE BIG BOOK OF THE BLUE

Denizens of the deep crowd oversized pages in this populous gallery of ocean life.

The finny and tentacled sea creatures drifting or arrowing through Zommer’s teeming watercolor seascapes are generally recognizable, and they are livened rather than distorted by the artist’s tendency to place human eyes on the same side of many faces, Picasso-like. Headers such as “Ink-teresting” or “In for the krill” likewise add a playful tone to the pithy comments on anatomical features or behavioral quirks that accompany the figures (which include, though rarely, a white human diver). The topical spreads begin with an overview of ocean families (“Some are hairy, some have scales, some have fins and some are boneless and brainless!”), go on to introduce select animals in no particular order from sea horses and dragonets to penguins and pufferfish, then close with cautionary remarks on chemical pollution and floating plastic. The author invites readers as they go to find both answers to such questions as “Why does a crab run sideways?” and also a small sardine hidden in some, but not all, of the pictures. For the latter he provides a visual key at the end, followed by a basic glossary.

A refreshing dive past some of our world’s marine wonders.