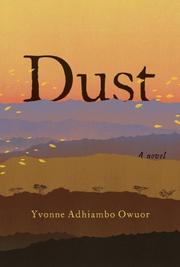 A brutal death in Nairobi prompts a reunion of the victim’s family and unlocks a host of troubling memories.

The center of Owuor’s moody debut novel is Ajany, a young woman who returns to her family’s northern Kenya homestead from Brazil after learning that her brother Odidi has been gunned down in the midst of post-election violence. (The novel is set in 2007, when the turmoil there left hundreds in the country dead and tens of thousands displaced.) As their father and estranged mother reconvene in Wuoth Ogik (“the journey ends”), their efforts to mourn in peace are soon upended. Chief among the disruptions is Isaiah, an Englishman whose father’s books fill the house in Kenya. Both he and Ajany’s father provide an opportunity for Owuor to explore the previous generations’ violence in the country, which she evokes in harrowing detail (family members’ military adventures in Burma in particular). But the novel’s strength is in the present, particularly as Ajany travels to Nairobi to uncover the circumstances behind Odidi's murder. And there, Owuor explores how layers of corruption threaten to overwhelm the sense of social justice among its citizens and how Westerners oversimplify the country’s predicament. Ajany’s character might be more effective were her back history in Brazil less sketchy, but Owuor intentionally keeps the novel’s tone impressionistic and indirect. Though that can make it harder to keep the plot lines straight, the prose has an appealingly rough-hewn poetry, built on clipped sentences and brush-stroke evocations of the dry landscape. (“The Kalacha dusk will soon descend in colors borrowed from another country’s autumn.”)

Owuor, the 2003 winner of the Caine Prize for African Writing, has style to spare, which more than compensates for the looseness of the narrative.