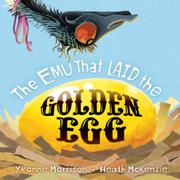 THE EMU THAT LAID THE GOLDEN EGG

When some Down Under desperadoes birdnap a voracious emu, they get more than they bargained for.

A flock of wild emus moves into town, eating pretty much everything in sight. Emma emu finds some kernels of corn in a creek and gobbles them up, but they give her a stomachache. She lies down to sleep, and when she awakens the next morning, she’s famished...and sitting on the shiniest and biggest egg she’s ever seen. She figures she must have laid it the night before. She goes looking for food, and two rotten possum scoundrels called Pongo Pete and Nasty Ned sneak up on the egg. Mighty hungry themselves, they first plan to eat it, but then they decide instead to kidnap Emma, figuring she can lay them a bunch of golden eggs. They take her to their hideout, where she voraciously chews whatever she can get her beak on—cushions, chandeliers, shoes and more. In a single thrashing move, she escapes! But left behind is an array of giant eggs, one of glass, another of brass, and silk and leather ones as well. Morrison’s offbeat adventure is told in vigorous verse, ably abetted by McKenzie’s illustrations, which seem to bring Emma’s feathers to ruffled life. Pete and Ned make nicely scruffy foils to Emma’s gawky greed.