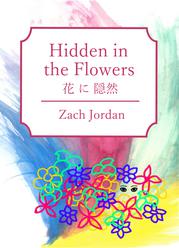 HIDDEN IN THE FLOWERS

A Japanese teenager in Texas discovers a strange connection to a missing person case in this philosophical novel.

When Japanese exchange student Hanabusa Saichi lands in Texas, he feels every inch a foreigner. Despite his severe anxiety, he’s decided to come to America for his freshman year of high school in hopes that the change of environment will help him break out of his shell. His new temporary home is the city of McKinney, Texas, and the Greenes are his host family: police officer Richard and his wife, Sandra; daughter, Kate; and son, Eric. The suburban charm of McKinney belies the ominous shadow looming over the city: four recent disappearances that the police believe could be the work of a kidnapper. Saichi becomes particularly interested in the case when, during one of his long walks, he discovers a hidden glen of flowers in the nearby forest. The glen not only feels like home in a way that no other place ever has before, but among the flowers Saichi also receives visions—including one regarding the fate of one of the missing people: Lauren Winters. As Saichi grows closer to the Greene children, he becomes increasingly obsessed with the case. Were these kidnappings, murders, or even suicides? When Eric disappears, solving the mystery becomes Saichi’s single concern. He wants to find Eric and protect Kate: “The answer presented itself boldly for him to make into his reason for being; he thought, if I can save Kate and Eric, then I’ll be able to save everyone else, including myself. Every mistake made before could be undone if he could triumph over the darkness of the world here.” Can the secret of the disappearances lead Saichi to the greatest mystery of all: understanding why he’s always felt out of place in the world?

Jordan’s prose is categorized by long, ornate passages deftly describing both the physical setting and Saichi’s psychological state: “Standing there just past the willow leaves he’d parted, Saichi hesitated to step in any further for fear of trampling on any individual member of the beautiful world he’d stumbled upon; to leave his mark in this negative manner would surely tarnish his heart forevermore.” While the premise is a captivating one, the novel turns out to be not a mystery so much as a ruminative exploration of Saichi’s conflicted psyche. The story crawls along at a pace that seems almost engineered to frustrate readers. (The first half-dozen pages are devoted to the last few minutes of Saichi’s flight from Los Angeles to Dallas, during which almost no information about him is given, but three separate announcements by the pilot are included in full.) For all the psychology, there is little recognizable humanity to be found: Even within the claustrophobic Greene household, Saichi feels like a brain floating by itself in a void. The other characters are flat and ghostly. The book is over 300 pages and manages to somehow feel twice that length. In forsaking accessible characters or a compelling story, the author leaves readers few reasons to stick it out to the end.

An intriguing but dense philosophical tale with supernatural elements.