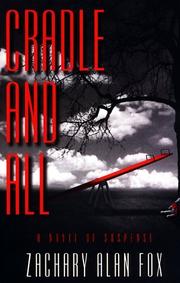 An overblown suspenser about a madwoman stalking a thoroughly good woman in ways you wouldn’t believe. Kate McDonald is married to a rising young deputy D.A. with whom she shares 3,500 square feet in upscale Brentwood, California, and leads the good life. Deservedly. Kate is a devoted social worker at demanding Midtown Memorial Hospital, a picture-perfect helpmate, and, above all, the very model of a modern mother to eight-month-old Alex. But suddenly the good life takes a nauseating turn, and Kate—bewildered, helpless—finds herself witnessing the piece-by-piece dismantling of her world. The process begins with the awful threat that comes scrolling across her computer screen one day: “Your baby is going to die——a message that disappears so fast she’s not even sure she’s seen it. But the appalling messages keep coming, as do the threatening phone calls. And then there’s the thing with the rats. And the other thing with swine fever. And the herpes, the poison, the infidelity (her husband’s), the conspiracy (her boss’s). And on and on. Who’s doing this to her? Who hates her enough? Why is everyone convinced she’s lying? She has no answers. It’s a particularly unkind cut when a quack of a psychologist diagnoses something called “Munchausen’s syndrome by proxy”—meaning that in his view she’s been making up stories because she’s starved for her attention. So her marriage ends. She’s threatened with arrest. She’s fired. Alex is kidnaped. And even then the blows continue to rain on Job-like Kate while, for the reader, the suspension of disbelief gets harder and harder. Less would have been more for Fox (When the Wind Blows, 1998, etc.), a writer of the school of plot-till-you-drop.