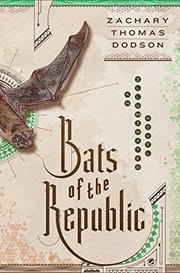 BATS OF THE REPUBLIC

Science fiction, the Old West, a book within a book, and wide-ranging graphics are among the paraphernalia that festoon this tale of bats, bloodlines, witches, and love played out over two centuries.

In the year 2143, seerlike priestesses control a nourishing liquid and vie with the police for political power in a post-apocalyptic U.S. that comprises seven city-states walled off from the surrounding wasteland. A young man named Zeke Thomas misplaces a letter possibly vital to asserting his bloodline and his future as a senator if he can deal with his envious cousin. His mate is embroiled in the missing letter, her gay father’s unorthodox dealings with the government archives he founded, and a friend’s pregnancy. A problematic epistle and a pregnancy—among numerous other parallels—are at the center of the 1843 narrative, in which the impecunious head of Chicago’s Museum of Flying dispatches his daughter’s suitor, novice naturalist Zadock Thomas, to deliver an important letter to a military figure in Texas. The westward odyssey allows the budding Audubon to sketch animals (shown in two-page spreads) before stumbling into a massive bat cave that may be a portal to the future (and perhaps to a sequel). In Zadock’s long absence, the daughter, Elswyth, must deal with his nasty cousin and her younger sister’s heedless coupling while getting advice from a seerlike aunt. As the author plays with history and fiction, the book within the book (shown literally in pages therefrom) tells some of the 1843 narrative. It is one of two written by Elswyth’s mother, another seer, who also wrote one called The City-State “set far in the future.” Dodson, a book designer, embellishes his debut novel with all manner of textual variations and graphic displays—and slyly has Elswyth say, “The City-State is tiresome to read, Louisa, it has too many devices and made-up words.”

Dodson has produced an unwieldy creature that is generally more fun than tiresome and impressive for the creativity and control he displays with his many disparate elements, if not for the wobbly coherence of the whole.