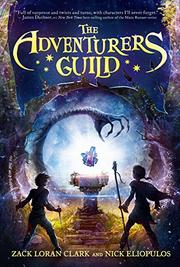 From the Adventurers Guild series, volume 1

Zed, the son of a single-parent human mother, has always wanted to join the Mages Guild. Brock’s choice of the Merchants Guild is rooted in family tradition. Covert, orchestrated circumstances lead the boys into the lowly Adventurer’s Guild, however, which only the guildless or unwanted enter. Zed and Brock soon learn that the Adventurer’s Guild is a rowdy mix of humans, elves, dwarves—and an archivist who can cast a mean spell or two when he has to—run by a ragged old woman by the name of Alabasel Frond. On their very first day, they and the other new apprentices are challenged to survive their first night beyond Freestone’s wall. A surprise attack by the Dangers that lurk without almost leads to the loss of life—and to a royal command that Frond eliminate the threat of the Dangers. On the mission to find the crystal that would protect the city, Zed and Brock’s friendship becomes closer than ever even as their kinship within the Adventurer’s Guild is deepened. Told in alternating chapters from the third-person perspectives of the two main characters, this tale is a page-turner that has the perfect mix of suspense, Princess Bride humor, and engaging characters, one that’s definitely earned the sequel to come.

A dazzling adventure sure to become a classic, if not a movie.