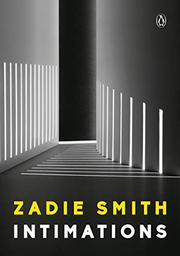 With 2020 barely “halfway done,” fiction writer and essayist Smith offers an incisive collection of short pieces reflecting, she writes, “some of the feelings and thoughts that events, so far, have provoked in me.” Those events, not surprisingly, center around the pandemic but also include the killing of George Floyd and the worldwide response to racial injustice that the murder incited. Sheltered with her family, Smith reflects on the meaning of creativity, particularly writing, which seems at once a way to gain control (“when I am writing, space and time itself bend to my will!”) and a way to fill time. “There is no great difference between novels and banana bread,” she writes. “They are both just something to do.” Yet these essays clearly have emerged from profound “moral anxiety” about privilege, hatred, and oppression: of “contempt as a virus.” The pandemic, she notes, has underscored pervasive inequality and injustice. “Untimely death has rarely been random in these United States,” she writes. “It has usually had a precise physiognomy, location, and bottom line.” At the heart of those distinctions is racism, laid bare by Floyd’s murder: “It was the virus, in its most lethal manifestation.” She once thought, she writes, “that there would one day be a vaccine: that if enough people named the virus, explained it, demonstrated how it operates, videoed its effects, revealed how widespread it really is, how the symptoms arise, how irresponsibly and shamefully too many Americans keep giving it to each other, generation after generation, causing intolerable and unending damage both to individual bodies and to the body politic—I thought, if that knowledge became as widespread as could possibly be managed or imagined, we might finally reach some kind of herd immunity. I don’t think that any more.” In just under 100 pages, Smith intimately captures the profundity of our current historical moment.