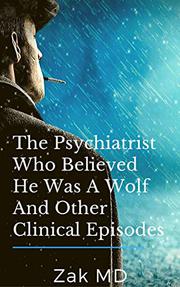 by Zak
GET WEEKLY BOOK RECOMMENDATIONS:

In Zak’s novel, a psychotherapist vividly chronicles his patients’ sessions.

At the outset of author Zak’s unconventional, oddly entertaining novel, his namesake lead has grown weary of the “frailty of the existence of the body and soul, rushing and whining in the materiality of the twenty-first century,” and wishes for some interesting therapy patients to enter his psychiatric hospital. What ensues is a barrage of surreal stories from the minds of his psychotic therapy clients. The first few patients share fantastical visions of themselves born into wondrous worlds. Initially, Dr. Zak’s concern for his patients remains detached yet collected. Thankfully, in the midst of these bizarre, frenetic delusions, Dr. Zak is the narrative’s grounding character, a reliable, if frequently distracted, protagonist. Most of the hallucinatory stories Dr. Zak hears are rooted in psychosis. Guy, one depressed patient, believes “some force is trying to drag me to the center of the Earth, and I resist,” while another imagines Death looking down at him in bed while lamenting how “customers are always unhappy with my sudden appearance.” Incrementally emerging as a radically unconventional clinician, Dr. Zak believes himself to be empathic and psychically experiences the maladies of those in his practice—a condition that becomes increasingly harrowing. As the patient stories intensify, the author moves deeper inside the doctor’s mind to discover unmet spiritual needs. Fantasy begins to commingle with reality, and Dr. Zak becomes obsessed with discovering the “woman of his dreams.” He envisions anthropomorphic creatures, including biting polar bears and talking flies and mice. As the stories and Zak’s involvement in them become more convoluted, the book loses momentum due to its sheer length. Ultimately, the patient-story formula becomes somewhat stale, leaving Dr. Zak to discern whether patients are in the slow processes of recovery or moving deeper into psychosis. Still, this is a frequently fascinating chronicle of fever-dream proportions.

Overstuffed and sometimes bewildering but always dizzyingly creative and adventurous.