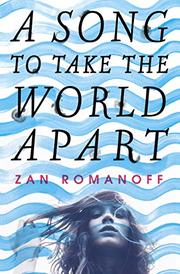 A SONG TO TAKE THE WORLD APART

A young woman encounters first love and family secrets in this lyrical debut.

Lorelei Felson lives a quiet life—literally, as her German-immigrant parents forbid music in their Venice, California, house and are mysteriously silent about their pasts. Workaholic Petra and bemused husband Henry leave the child-rearing of Lorelei and her older twin brothers, Nik and Jens, to stern grandmother Oma, but Oma’s death derails the dysfunctional family. Blonde, white sophomore Lorelei rebels by falling for rocker senior Chris Paulson, also white, but their relationship remains unofficial and riddled with lies due to Chris’ allegedly co-dependent mom and fickle band mates. Like her olive-skinned friend Zoe Soroush, Lorelei navigates typical teen trials—first boyfriend, first chance at sex, first breakup—but Lorelei also discovers that she is a siren. Grieving and in love, Lorelei accidentally, then intentionally sings to compel and control those around her until she must take responsibility for her recklessness. Romanoff’s writing is both artistically impressionistic and raw with emotion; the pace is slow, plot minimal, and secondary characters inscrutable, but the protagonist is often entrancing. Lorelei’s angst-y self-discovery best reads as a coming-of-age allegory with a superfluous supernatural twist.

No aquatic frolic but a moody meditation on loss and love.