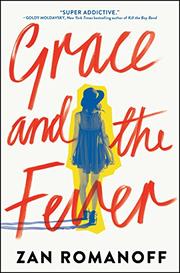 GRACE AND THE FEVER

A fangirl finds herself entangled in the real lives of the boy band she loves.

White teen Grace Thomas lives in a suburb of LA, working as a barista over the summer before college. She leads a double life: one with her best friends, who’ve grown distant, the other online as “Gigi,” a member of the Fever Dream fandom. Grace keeps her time on Tumblr secret from her friends and never shares photos or her real name online. So when she runs into Jes Holloway, the bad boy, mixed-race (Indian and white) heartthrob from Fever Dream, hanging out on her very street, it’s as if two parts of herself collide. She plays it cool, but then a paparazzo shows up—and Grace is suddenly the mystery girl all over the internet photographed with Jes. As she enters the private world of Fever Dream, she struggles to separate her identity as a fan from the person she wants Jes to see. Soon she learns that everything she’s imagined about her favorite band isn’t real—and she’s lying to everyone around her. Tumblr posts from the fandom and Grace’s ruminations on the community anchor the dreamlike scenario, related in a closely focused third-person present tense. Her growth coupled with the drama of a burgeoning celebrity scandal make for an immersive, touching read.