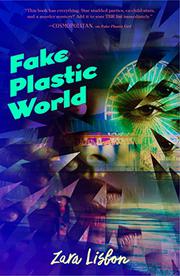 The price of fame can be lethal in the edgy follow-up to 2019’s Fake Plastic Girl.

Sixteen-year-old Eva-Kate Kelly was stabbed only once with a ceremonial Wiccan dagger, and her body was found in the canal just outside her Venice, California, home. Unfortunately, Justine Childs’ fingerprints are all over the athame, and she’s arrested for murder. Justine’s parents hire a brilliant defense attorney, but while she’s awaiting trial, Justine decides to do a little investigating of her own, hoping to clear her name and desperate to know what really happened to Eva-Kate. There are more than a few people with motives for murder, but all Justine really learns is that Eva-Kate was hiding even more dark secrets than she suspected. For the assistant district attorney, Eva-Kate and Justine’s twisted tale of mutual obsession is the perfect storm, and the hard-drinking, pill-popping Justine’s history of mental illness works against her. Even worse, though she’s only 16, she’s to be tried as an adult. Eva-Kate had more fame than she could handle, and Justine desperately wanted just a bit of it for herself, but does that mean she was capable of murder? First-person narrator Justine, who steadily falls apart without Eva-Kate’s attention to sustain her, is the perfect vessel for Lisbon’s exploration of how tightly fame and infamy are entwined, and the courtroom scenes crackle with tension. Main characters are white by default.

A fast-paced sequel with a few killer twists.