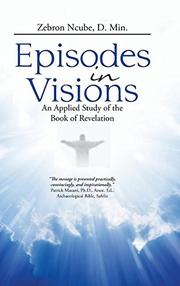 An Applied Study of the Book of Revelation
by Zebron Ncube
BUY NOW FROM
AMAZON
BARNES & NOBLE
LOCAL BOOKSELLER
GET WEEKLY BOOK RECOMMENDATIONS:

An illuminating journey through the final book of the New Testament.

Ncube, a Christian minister, walks readers through the epic, though often confusing, book of Revelation. His stated goal is to provide a resource for individual readers, study groups, and churches that makes the Scripture more accessible. He begins with a brief summary of prophecy in the Bible generally and eschatological predictions in particular. The remaining nine chapters allow readers to focus on each part of Revelation’s story as it unfolds. In each one, Ncube recites a lengthy biblical passage, states his objective for the study of that passage, and then delves into details. He often quotes or refers to evangelical scholars to back up his more academic or technical arguments, but the book doesn’t dwell on academic minutiae; instead, it strives to elucidate murky concepts by providing historical, literary, and cultural background. For instance, while explaining the famous but enigmatic seven trumpets of Revelation, the author offers more than four pages on the role of trumpets in Scripture and in the ancient world. In this way, Ncube finds intriguing lessons for lay readers. For instance, he asserts that even in retirement, believers can be put to work for God (“Your availability is more important to God than your ability”), and he points out that the biblical author John, exiled in his old age, faced a similar situation. The book also often summarizes complex texts in simple ways; for example, “Chapter 20 [of Revelation] is a prophecy about the future of bad people. Chapter 21 is a prophecy about good people.” Overall, Ncube’s approach is highly detailed but also admirably straightforward.

A useful lay resource in a crowded field of biblical study.

GOD IS ALIVE AND WELL
by Robert W. Walker
Indie

Preserved for the End of Time
by A. A. Kevas
Indie

The Revelation of Jesus Christ—Comfort or Confusion?
by L. Ralph Rohr
Newsletter sign-up