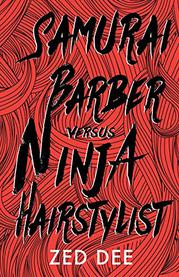 Dee offers a playful dystopian novel about the adventures of an unusual hairstylist.

The city of Lionfish is home to a samurai who cuts hair. This samurai, whose name is later revealed to be Dakota, does his haircutting with a katana, and he’ll do it for free for the poor. As a result, he’s never made much of a living with his skill set until one day when he gets the opportunity to “cast” his work, giving him a large audience of smartphone users. Not all is well for the samurai barber, however. On a train ride, he meets an unusual ninja who’s also skilled at cutting people’s locks by nontraditional means—and he’ll do so even if the person doesn’t ask for a haircut. After the ninja manages to slice off a miniscule bit of Dakota’s hair, the samurai retaliates by killing him. Dakota feels bad about this act, though, and is soon brought to justice—not for taking the ninja’s life but, oddly enough, for murdering the train on which the event took place. It’s no surprise that justice in Lionfish is so strange, as a lot of things about the town seem a bit weird. It’s a place where cellphones literally eat batteries and homes can be grown from seeds. However, it also has a less quirky, darker side; greedy nurses attempt to upsell patients, and the difference between rich and poor is truly vast. The samurai barber is fined and whipped for his crime, but Dakota is left with questions afterward: Who trained this audacious ninja? And why would someone go around cutting the hair of those who don’t want it? Dakota’s quest takes him deeper into what makes Lionfish tick. Can society, as one character professes, be changed “one haircut at a time”?

To many readers, this novel’s premise may initially seem rather silly, but the story ventures to many serious places. Blood flows freely and violence runs rampant, but the average citizen of Lionfish is too busy looking at casts to care much about any of it. All the injustice draws many people to anarchy, but is that the answer to their problems? The contrast between the novel’s lightheartedness and its earnest critique of modern living is refreshing. Likewise, the free-wheeling style keeps the narrative in constant motion. Many scenes are sparsely embellished, and characters are only provided backstories when necessary—no matter how out of the ordinary they may be. Some things, however, get lost in the shuffle. At one point, for instance, the samurai has a nightmare, and although it’s full of vivid imagery, it pales in comparison to the more concrete events, as when a character loses his job, his savings, and even his family to a scam. The town of Lionfish proves to be both tough and bizarre but never entirely unrelatable, and the story’s end, when it comes, is just as off-kilter as its beginning.

A novel premise that comes out of left field but launches an oddly poignant adventure.