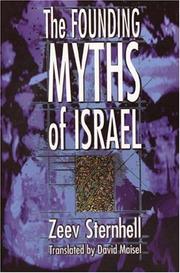 THE FOUNDING MYTHS OF ISRAEL

Nationalism, Socialism, and the Making of the Jewish State

For decades, Israel's social-democratic Labor Party was the country's predominant political force, consistently holding a plurality of power against the right-wing ``revisionist'' and religious parties. Yet contemporary Israeli society has more social inequity than almost any other developed nation. Asks political scientist Sternhell (Hebrew Univ.): How can this be? Easy, he answers. From at least the 1920s and possibly earlier, the ruling elites of the Jewish settlement in Palestine were far more interested in increasing the Jewish population (about 75 percent of the total population was still Arab in 1947, the year of the UN's partition resolution) and in other forms of state- building than in redistributive socioeconomic policies. Sternhell exhaustively documents his thesis by quoting extensively from the writings and speeches of Labor Zionism's long-time political and ideological leaders, David Ben-Gurion and Berl Katznelson. As the latter put it in 1925, ``It is not the interests of class warfare that must determine the needs and strategy of the movement, but those of building up the land.'' Thus, the national workers' federation, the Histadrut, took on a strongly centrist orientation, in which a certain degree of antidemocratic tactics, as well as some financial corruption, were tolerated. The government was thus also uncompromising in staking Jewish claims to the land against those of Arabs. In general, this account is so focused on political ideology that it doesn't quite provide enough of a demographic, geopolitical, and historical context when it comes to issues of equity in Jewish-Arab relations or another matter he broaches, Zionism's commitment to rescue, rather than to internal issues, during the Holocaust. Still, for those fascinated by Zionist ideology and Israel's early history, this is one of the most provocative of the recent rash of ``post-Zionist'' studies that debunk earlier works on Israel's founding fathers and mothers.