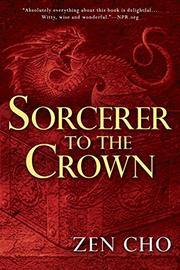 SORCERER TO THE CROWN

Set in an alternate, magical England during the Napoleonic Wars, Cho’s debut novel is at once a comedy of manners and a sharp metacomment concerning racism and misogyny in the fantasy genre.

Most thaumaturges agree that Zacharias Wythe is a most unsuitable Sorcerer Royal. Born a slave of African parents, he was set free by his predecessor, Sir Stephen Wythe, who raised him and trained him in the magical arts as a kind of experiment. Zacharias’ skin color bars him from social acceptance; moreover, he’s commonly assumed to have wrested the late Sir Stephen’s staff from him by nefarious means. Nevertheless, Zacharias strives to serve his fellow magicians by determining why the magic level in England has diminished recently. He's distracted in his quest by assassination attempts, the conflict between the sultan of Janda Baik and that nation’s witches, and the presence of Prunella Gentleman, a young woman of uncertain but presumably half-Indian parentage, who is possessed of powerful magical gifts that ladies are firmly encouraged to suppress. Many voices in the sci-fi community have spoken of the need for diversity in authors, characters, and subject matter and have faced some unpleasant public blowback for that view. In this book, Cho is both providing that diversity and directly responding to those who prefer a more traditional (read: white male) approach to fantasy. She uses wit, charm, and romance to make her point; the result is a classic, gently barbed upper-crust comedy mixed with magical thrills, modern social consciousness, and a hint of political intrigue.