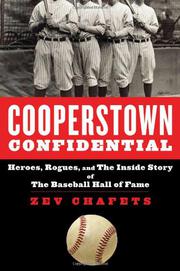 Heroes, Rogues, and the Inside Story of the Baseball Hall of Fame

Best known for his Middle East journalism—he is the founding managing editor of Jerusalem Report and author of works on Jewish issues and culture (A Match Made in Heaven, 2007, etc.)—Chafets brings both a fan’s affection and a social critic’s eye to his examination of the Cooperstown, N.Y., institution. He begins with a visit to the Hall’s 2007 induction ceremony, where he wanders around with thousands of others in attendance, raising issues he examines more thoroughly later—fame, race, ethnicity, the steroid scandal and the torrents of money involved in the game and its memorabilia. Chafets sketches the history of the Hall, founded in 1939 by Stephen Clark, son of Cooperstown scion Edward Clark, Isaac Singer’s partner in the sewing-machine industry. The author considers baseball’s preposterous creation myth involving Abner Doubleday and looks at some of the early notables involved in the Hall. He charts the rise of baseball statisticians—most notably Bill James, who was initially viewed as a crank—and discusses the so-called “character clause” (No. 5) in the Hall’s rules for election. Here, Chafets sees monumental malfeasance and quite a bit of racism and cronyism. Because baseball writers—almost all of them white—are the voters, players who curry favor with them have an easier path. As Chafets notes, the Hall comprises myriad drunks, adulterers, racists, gamblers, cheaters and liars—but occasionally the writers invoke Rule 5 to prevent the inclusion of someone with a personality too crusty, a history too tainted or a skin too dark. Chafets examines the cases of Joe Jackson, Pete Rose, Dick Allen, Jim Rice, Barry Bonds, Roger Clemens and others, concluding, in general, that Rule 5 should be eliminated.