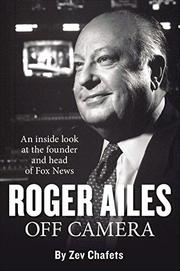 A chatty look into the life and motivations of Fox News founder Roger Ailes.

Fans of Ailes will recognize many of the incidents related in Chafets’ (Rush Limbaugh: An Army of One, 2010, etc.) authorized biography. However, for those unfamiliar with Ailes’ story, the author’s narrative traverses his childhood, his early career experiences, his keen political intuitions, and his shrewd understanding of the cable-news business and its role in our media-saturated society. Ailes quickly grasped that personality would drive ratings on cable news. “He realized that it isn’t like broadcast news, an hour or two a day,” explained an Ailes colleague. “It’s a twenty-four-hour operation, which means that a good part of it has to be about opinions.” Once Rupert Murdock hired Ailes and he assembled his news team, Fox News began its ascent. Chafets flushes out his portrait of Ailes through an amalgam of individuals who offer vignettes and quotes describing the Ailes personality, business style and media matters, from their vantage point within or outside of his sphere of influence. Ailes’ conservative stance is well-known, but the author offers a list of Ailes’ liberal friends, including members of the Kennedy clan, Chris Cuomo, a CNN journalist and son of the former governor of New York, civil rights leader Jesse Jackson and Dennis Kucinich, “the longtime darling of the progressive wing of the Democratic Party.” Ailes hired Doug Kennedy, a reporter and the youngest son of Bobby Kennedy, to work at Fox. “What people don’t understand is that Roger is very comfortable with others who don’t agree with him,” Kennedy explains. “He knows what he believes and says it—Roger never talks for effect—and we go out to lunch and really go at it. All he asks is that you be real with him in return.”

No matter where readers are on the political spectrum, this light biography is a tantalizing look into the life of a man who altered the TV-news landscape.