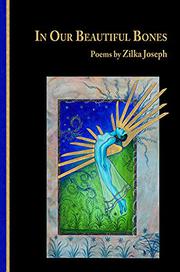 IN OUR BEAUTIFUL BONES

A collection of poems about an immigrant poet’s journey from India to the U.S.

The author retraces her steps from her hometown of Kolkata to her new home with her husband in Chicago. In “Drinking Vodka at 35,000 ft.,” she recalls flying from one country to the other and the awe of seeing the “forget-me-not blue” of Lake Michigan for the first time. She confronts the subtle (but no less offensive) racism of 40-something professionals in a book club who ignorantly ask about her English skills, arranged marriage, and the caste system. She notes her identity as an Indian Jew and contemplates the disparate generational approaches to food between a mother and a daughter in “What’s Wrong With Wilted Lettuce.” She questions the hypocrisy of Americans who complain about the smells of Indian cooking yet co-opt ingredients, like turmeric and garam masala, asking, “This food is hip to some, but not / when we live, cook next door?” In “25 Responses (or Pick-a-Combo or Take It as You Like It),” the author enumerates insensitive and racist comments that range from “Ah, they’re jealous to see immigrants doing well” to “At least they didn’t have guns.” Joseph’s language is as powerful as it is poetic, such as when she describes how “the sailor’s hearts / shrunk from fear,” watches a “windshield bulge / like a goatskin,” or compares an engine to an “animal thrashing” on a Bombay steamship. Joseph’s fresh eyes offer new takes on what may be mundane for many readers. Documenting her first experiences with snow, she reflects, “The ‘s’ in ‘snow’ / wraps around me like an icy tongue, / the ‘o’ like blue lips / with the power / to swallow everything.” She does not shy away from the brutality of colonization, stating, “ah the British stayed for only 200 years you know / took us to the cleaners / took us to church / where they / ate our bodies drank our blood.” The book is nearly flawless save for the occasional poem that spans several pages and could have been edited down.

A standout poetry collection that fearlessly examines one immigrant’s experience.