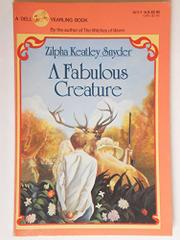 The delightful uncertainties and personalities of Snyder at her best are missing from this slightly older story, which could be said to deal with the temptations of the flesh. The central character is almost-16-year-old James Fielding, who is spending a summer with his mother and professor father in a "wilderness" cabin near a ridiculous (and ridiculously expensive) summer community that is modeled after an Army base and called "The Camp." Exploring about, James discovers a majestic stag in a hidden valley; but he is soon distracted from his daily contemplation of the animal by another fabulous creature: sexy, bikini-clad Diane Jarrett—a Camp resident whose home is full of hunting trophies and who treats James, with a tantalizing alternation of inviting and evasive behavior, as another form of prey. James does share the deer with another, younger, Camp inmate, Griffin, a loner and nature-lover who reads widely, performs ritual ceremonies on the rocks, and clams up at the mention of her rich, runabout, gin-fizz-for-breakfast mother. Griffin swears to keep the deer a secret from the hunting Jarretts; but James, when Diane turns her attention to an older boy, half-helplessly offers her a look at the deer as a way to get her back. Of course, Diane wants that magnificent rack for a trophy—her father, seeing a photo, exults that it "would break every existing record"—and the Jarretts plan a return trip in hunting season. When the time comes, Griffin runs away from home; and James, reading about her disappearance, guesses her mission and joins her at the Camp for a confrontation with the Jarretts. The non-serious accident that ultimately saves the deer has been carefully prepared from the start, but when it comes it seems too neatly contrived. Snyder's picture of the dreadful rich and their crazy compound might be worth the reading, but otherwise the story lacks snap. Predictable Griffin is not one of Snyder's intriguing young-girl characters—partly no doubt because readers are directed to sympathize from the start. Diane, also transparent from the start, is a stereotypical explorative flirt without style or subtlety; and when the first three-fourths of the book seems dominated by her yes-and-no manipulation of James, she becomes plain boring.