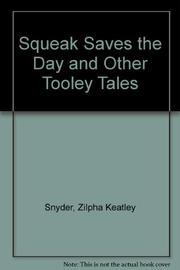 Seven stories about diminutive people—Tiddlers—who live in the forest, behaving a lot like STOMPERS (humans) but, like Borrowers, concealing themselves from them. Nipper Tooley wishes for a dog, but dogs are too big, so he has a pet mouse. He finds and wants to keep a STOMPER baby—but it eats too much, and the logistics of changing its diaper are beyond him. His sister Trinket's friend, Dimity Daw, has so many little brothers and sisters that her mama says she doesn't need a doll, but Dimity is tired of obstreperous "live dolls" and wants one that "does only what I pretend it's doing"; Trinket helps her lug home a STOMPER doll, too big for the younger children to drag around. A bedraggled fairy who is taken in (she's a cross between Andersen's Real Princess and the Man Who Came to Dinner) orders tea cakes every morning—till mother Brindle Tooley has the wit to set her back out on the doorstep. Tiddler names are delightful, including publican Julep Quaff and his best customer, Toper Careen. The charm of a miniature world and the humor produced by applying logic and common sense to its problems are sure to amuse. Simple prose and independent chapters make this appropriate for newly independent readers.