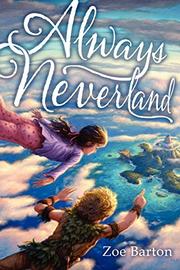 A petulant brat brings Girl Power to a Neverland devoid of whimsy and charm in this unnecessary sequel to Peter Pan.

Sixth-grader Ashley feels very sorry for herself: Her parents actually have to work the weekend before Christmas, rather than stay home and fulfill her fantasy of the perfect holiday. Fortunately, she finds a strange boy trying to catch his shadow in her bedroom, instantly recognizing him and the potential for adventure. One quick glue job later, Ashley flies off as the latest "Wendy girl." But she has no intention of mothering the Lost Boys or doing the Spring Cleaning; her heart is set on fighting pirates and meeting mermaids. Alas, what could have been a witty, spirited romp is marred by the unlikable heroine, who, despite being a bossy self-centered showoff, is instantly better at everything (flying, sword-fighting, pretending) than everybody else and has little trouble making herself adored by all denizens of the fantasy isle. Peter himself has all of the arrogance and heartlessness of the original, but none of his cleverness and charisma. While the short chapters and frequent cliffhangers sustain a brisk pace, the plot and setting tepidly rehash Barrie's version with a few extra details borrowed from Narnia and Oz.

There are many good stories still to tell about the Boy Who Never Grew Up, but this isn't one of them