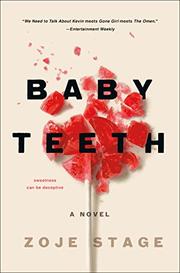 A mute, diabolical 7-year-old wages war against her mother in this chilling debut.

Hanna Jensen has never spoken aloud in front of another human being. Her parents, Alex and Suzette, have subjected her to scores of tests, fearing a physical disability, but in truth, Hanna simply finds words to be an ugly means of expression and chooses not to use them. Hanna also knows that her silence anguishes her mother, which is an added bonus; although Hanna adores her father, who believes she can do no wrong, she despises Suzette and torments her at every turn. Hanna has been expelled from three preschools and two kindergartens for bad behavior, forcing Suzette to home-school her—an arrangement that further strains their fraught relationship. The constant stress is wreaking havoc on Suzette’s health, so she redoubles her efforts to locate a school that will accept her troubled child. But as Suzette dreams of child-free days, Hanna is making plans of her own. This tightly plotted, expertly choreographed tale unfolds in alternating chapters from the perspectives of Hanna and Suzette. Author Stage palpably conveys Suzette’s fear, anger, frustration, and desperation while exploring the deleterious effects that motherhood can have on one’s marriage and self-worth. Hanna’s chapters are calm and upbeat by comparison, but they offer no respite from the book’s mounting tension; naïve observations and whimsical fantasies share the page with twisted musings and nefarious schemes, the jarring juxtaposition only compounding the reader's sense of unease.