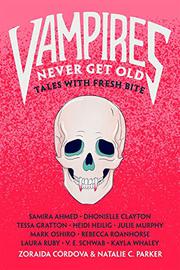 Fresh takes on a perennial paranormal favorite from leading YA authors.

The classic vampire archetype—“white, cisgender, straight, and able-bodied”—makes way for a diverse reimagining of the blood-drinking immortals in this anthology. In Tessa Gratton’s “Seven Nights for Dying,” an anonymous narrator is given a week to consider an offer while grappling with furious grief. A lonely teenage Latinx vampire makes an unexpected connection through his blog in Mark Oshiro’s “Mirrors, Windows & Selfies.” An Eternal woman and a Shadow Baron make a wager in Dhonielle Clayton’s “The House of Black Sapphires,” set in a dazzling alternate version of New Orleans. A gay Native teen summons an urban legend in Rebecca Roanhorse’s “The Boys From Blood River” but gets more than he bargained for. Themes of power, transformation, and agency weave through these 11 tales, which also feature a 19th-century grave robber, a cheerleading vampire slayer, and an Instagram-savvy elder vampire. The tone of the stories ranges from the playful narration of Samira Ahmed’s “A Guidebook for the Newly Sired Desi Vampire” to the simmering rage of Kayla Whaley’s disabled protagonist in “In Kind.” The cast, living and (un)dead, includes characters who represent multiple dimensions of diversity. Each story is followed by a brief commentary and thought-provoking questions from the editors.

Vampire fans, sink your teeth into this satisfying collection.