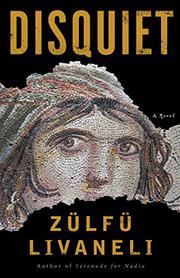 A somber, pensive novel, by one of Turkey’s greatest modern writers, that centers on current and ancient troubles at a historic crossroads.

Ibrahim, a young journalist in Istanbul who works for a paper that thrives on mayhem, picks up on a disturbing item in a news-budget meeting: A Turkish pizza cook has been murdered by neo-Nazis in Germany, and his circumstances are familiar. “If this person’s name was Hussein Yılmaz, and if he’d been born in Mardin and was thirty-two years old, it couldn’t be anyone other than my childhood friend Hussein,” Ibrahim realizes. Soon he’s off to his hometown, an oasis in the red-dust desert near the Syrian border where everything has changed in the years since he’s been gone. Hussein, he learns, has been effectively killed twice. First, an IS sympathizer shot him, crying “that this was what happens when you betray Allah for Satan,” and left Hussein for dead. Hussein’s crime? To fall in love with a Yezidi refugee woman with a blind baby, a member of a tribe rumored to worship the devil, although, Ibrahim remarks, in truth “Satan worships them.” The violent clash of cultures betrays a history of tolerance and multiculturalism, and when Hussein, transported to Germany to recover, finally meets his death at the hands of skinheads, it all comes full circle; says Hussein’s brother, “When I think about it, it drives me crazy, Ibrahim...I mean, Muslim jihadis and Crusader Nazis committed a joint murder.” Livaneli’s slender narrative contains multitudes: It plays at several points with Kurdish, Arabian, and Turkish folklore in a provincial city that, Ibrahim says, has a “broken down fairy-tale atmosphere,” and at the same time it subtly critiques a present marked by civil war, the ministrations of celebrities like Angelina Jolie in the teeming refugee camps nearby, and a media insatiable for if-it-bleeds-it-leads stories of the exact sort that Ibrahim uncovers—and, we know as the story closes, he cannot help but file.

A brief but intensely emotional, memorable story that spans centuries and continents.