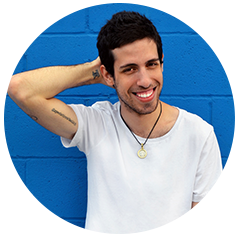 Finding Not Just Yourself in Books, but the Path to Becoming a Hero
By Adam Silvera
Adam Silvera is the New York Times bestselling author of More Happy than Not and History Is All You Left Me. Both novels received five starred reviews. His new novel, They Both Die at the End, published on Sept. 5, 2017.

I didn’t see my sexuality represented in fiction until I was 19 years old, and it was in a fantasy novel. I picked up Cassandra Clare’s City of Bones as a bookseller looking to fill the lightning-shaped hole in my heart left behind by the Harry Potter books. I was instantly addicted to the politics and magic attached to Clare’s hidden world in New York as well as to the demon-hunting Shadowhunters. I didn’t expect one of the Shadowhunters to be gay, because why would I? I’d only seen queer heroes in fan fiction, not fantasy blockbusters. There were definitely vibes I got from Alec Lightwood, but I swore I was just projecting. And then his sexuality was revealed and I tore through the rest of the trilogy within a week because I felt seen and real because Alec’s heart was like mine. It impacted me so much I came out later that year.

Was I excited when J.K. Rowling revealed in an interview that Dumbledore was gay? Of course; Dumbledore is awesome. But because Dumbledore’s sexuality wasn’t a presence on the page, unlike Alec’s, it didn’t carry the same weight that stirred so much excitement in 19-year-old me.

Teens should be able to open a book and recognize a character who loves like they do. Bonus points if the protagonists can embrace their sexuality while also saving the day, since queer representation is significantly lacking in YA genre fiction.

Some authors behind recent speculative novels hit these notes beautifully. Alex London’s Proxy and Guardian are worthy of Divergent fame with their thriller pacing and cinematic action. Labyrinth Lost by Zoraida Córdova features a bisexual bruja rescuing her family, and the story’s love triangle absolutely charmed me. Marie Lu’s The Young Elites and Kiersten White’s And I Darken are major fantasy series with queer leads—and their perspectives!—in the central action. Andrew Smith’s Grasshopper Jungle and Shaun David Hutchinson’s We Are the Ants show the end of the world through the eyes of young men confronting confusing romances—while also dealing with 6-foot-tall praying mantises and aliens, respectively. And even more!

Once genre fiction stops shying away from sexuality, teens won’t have to stumble onto characters they only expect to find in contemporary novels. They’ll see they can be the heroes too.