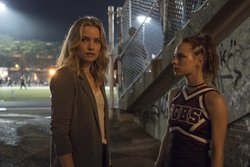 Dare Me: Adaptation of Megan Abbott Novel of Cheerleading and Murder Is a Slow Burn

Cheerleaders are common characters in high-school dramas, but they’re rarely the main players. Most often, they serve as vicious and/or dimwitted foils for the nicer, smarter characters. There are rare exceptions, such as the 2000 film Bring It On, which largely avoids such stereotypes and refreshingly takes cheerleading seriously as an activity of impressive athleticism and skill. Megan Abbott’s 2012 novel, Dare Me, splits the difference, featuring a mean-girl squad and a tough cheer coach who are dead serious about their craft. This being a crime novel, a few of them also get involved in a sordid murder. But the killing is by far the least interesting part of the book. The same can be said for the upcoming USA Network TV-series adaptation, whose first episode airs on Dec. 29.

The book takes place in a Midwestern anytown full of partying teens and apathetic parents. Addy Hanlon, the 16-year-old narrator, and her best friend, Beth Cassidy, are both dedicated cheerleaders; Beth is the squad’s queen-bee captain with a real mean streak. But their new, no-nonsense coach, Colette French, declares that there will be no captain on her squad. This sets her and Beth at odds, but all the other cheerleaders, especially Addy, find themselves enraptured by the beautiful and charismatic Coach. They all crave her approval, even as she puts them through no-pain-no-gain practices. When Addy and Beth discover Coach (who’s married) and a military recruiter having illicit sex, it irreversibly changes the dynamic between them all. Beth gets some of her old power back, and Coach takes Addy under her wing, allowing her to hang out with her and her lover outside of school—which in turn, ignites Beth’s jealousy. Then Coach’s lover turns up dead—an apparent suicide—but Addy soon finds that some things don’t add up about his demise.

There’s more to the story in the book, and it’s no spoiler to say that there is foul play involved. However, the final resolution, after all the buildup, is a bit of a fizzle. For quite a while, it seems that Abbott is setting up a Double Indemnity-style plot in the cheerleading world, with Coach in the role of the bored wife with an inconvenient spouse, and Addy as her willing accomplice/dupe. It doesn’t go that way, sadly, but the way that it does go feels like the blandest of all the possibilities.

Still, the novel does, at least, end. The TV show, by contrast, is a very slow burn that takes several episodes to really get moving. By the end of 10 episodes, things still feel very much up in the air, like a cheer-squad member in midflight. It also spends an unnecessary amount of time with the adult characters, who mostly lurk in the background of the novel. That said, Abbott herself serves as a writer and executive producer for the series, and much of the language and feel of her darkly intense novel transfers over intact. Both, for example, have their teenage cheerleaders paraphrase Friedrich Nietzsche’s cool-when-you’re-a-teen line: “When you gaze into the Abyss...the Abyss gazes into you.” And the show doubles down with new, entertainingly hyper-dramatic pronouncements, as when Addy narrates: “To make things happen, you gotta burn the candle at both ends. But [Coach] never told us what comes next: You incinerate.” That’s good stuff, as are the frequent slow-motion sequences that, at their best, imbue everyday actions with unexpected layers of meaning.

The Get Down’s Herizen F. Guardiola, as Addy, delivers the aforementioned lines with convincing gravitas, but she’s only the third most interesting performer. Australian soap actor Marlo Kelly is relatively unknown in the States, but her work here may change that; she brings out Beth’s viciousness and brokenness in all its glory, without leaving anything in the locker room. Meanwhile, The Goldfinch’s Willa Fitzgerald effortlessly portrays Coach as, by turns, steely and fragile.

As Kirkus’ reviewer noted, “the question of who is emotional victim versus who is predator becomes murkier and more disturbing than any detective puzzle.” Indeed, in both the book and film, the crime elements of the story are nothing special. But both provide a riveting look of a little-seen subculture in fiction. Everyone is tough on each other and on themselves, but it’s all in the service of something higher.

Again and again, Abbott gets across how cheerleading, and even cheerleading practice, can be simultaneously brutal and transcendent: “The bleacher sprints are punishing, and I feel my whole body shuddering—pound-pound-pound—my teeth rattling, it is almost ecstatic—pound-pound-pound, pound-pound-pound—I feel almost like I might die from the booming pain of it—pound—I feel like my body might blow to pieces, and we go, go, go. I never want it to stop.” Whatever Dare Me’s faults, it’s a very long way from pom-pom clichés. 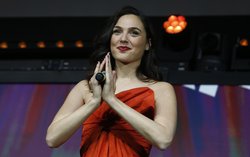 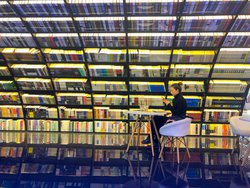 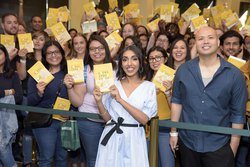 Rupi Kaur Named Writer of the Decade by the New Republic
By Michael Schaub on December 24, 2019 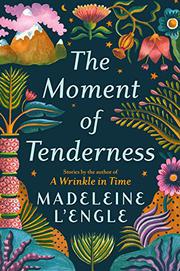