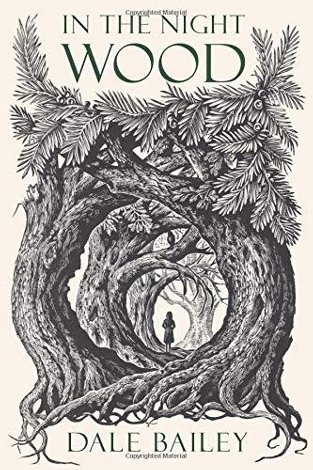 Halloween is approaching and if you're like me, you like to use October as an opportunity to fill in the horror-shaped holes in your reading schedule. Here are thirteen excellent reads that will do just that.

If you haven't heard of Slender Man, he's a modern-day supernatural bogeyman born out of a 2009 Internet meme. He is described as being a thin and unnaturally tall humanoid figure with a featureless head and face. He wears a black suit when he stalks and abducts people, usually children. This persistent meme has been given a straight-up horror novel treatment in Slender Man, a new novel about one man's search for the truth behind the urban legend. The story unfolds through a cleverly told series of journal entries, newspaper clippings and online conversations, all of which adds to the mystique of the mysterious figure.

In the Night Wood by Dale Bailey

Charles Hayden is a grieving biographer of a Victorian fantasist named Caedmon Hollow, who happens to be his wife Erin's ancestor. Charles and Erin move from America to England to heal themselves and their marriage after a devastating loss. After moving into a remote mansion, they find themselves slowly slipping into the supernatural world that—perhaps literally—consumed Caedmon Hollow. Bailey's ghost story is engrossing and notable for its depiction of using love to overcome loss.

If you're a fan of horror fiction you've probably heard of Ellen Datlow, who has been editing horror fiction for more than three decades and serving up anthology after anthology of fantastic horror reads. Her ongoing series The Best Horror of the Year has now been running for ten of those years. To celebrate, she has collected the best of those stories from the past decade and collected them into the massive treat that is The Best of the Best Horror of the Year. The twenty-eight stories it contains include terrific-but-unsettling stories by Laird Barron, Gemma Files, Neil Gaiman, Mira Grant, Tanith Lee, Livia Llewellyn, Peter Straub and more. Don't miss it.

The House by the Cemetery by John Everson

What could possibly go wrong renovating an old house located next to a cemetery for the purposes of turning it into a haunted house amusement attraction? Well, just about the worst things that can go wrong. Mike Kostner needs cash, so when his friend throws him this renovation job, he jumps at the chance. As Mike comes to learn, the house seems to have a life and dark history all its own. As readers will come to learn, this is a book that is hard to put down. I devoured this book in two sittings, furiously turning pages towards the blood-soaked conclusion.

The Nightmarchers by J. Lincoln Fenn

On a remote Pacific island in 1939, a woman named Irene Greer plunged off a waterfall to her death, convinced that the spirits of her dead husband and daughter had joined the nightmarchers, the name given to the ghosts of the island's ancient warriors. To Julia Greer, her ancestor, that's just some old family history. Julia is a struggling journalist, focusing on the here-and-now, trying to make ends meet. Then her elderly great-aunt calls with a proposition: in exchange for lots of money, Julia is to travel to the remote island, collect samples of a very special flower, and find out what really happened to Irene all those years ago. She soon finds that conspiracy and secrets surround Irene's death.

The Haunting of Hill House by Shirley Jackson

What is a 1959 gothic horror novel doing in a list of mostly recent horror books? Well, besides being an undeniable classic work of literature written by one its finest masters, it has also been recently re-released to coincide with the brand new Netflix adaptation, streaming right now. The haunted house in question is an eighty-year-old mansion notorious for being the location of bizarre events. In hopes of explaining the unexplainable, a group of people—an occult scholar, his assistant, a woman acquainted with poltergeists, and the house's future owner—stay at the house to get to the bottom of things. Supernaturally speaking, things do not go well for them.

Valancourt Books has recently started reprinting out-of-print classic horror novels, allowing them to find new fans among modern audiences. That's good news for readers who want to know what the horror of yesteryear was like. (Spoiler alert: Lots of fun!) Three titles are newly available this month:

The Conspiracy Against the Human Race by Thomas Ligotti

Here's one for non-fiction readers. Ligotti, known primarily for his disturbing supernatural horror fiction stories, here offers readers a glimpse into the mind that creates it. This collection of non-fiction essays takes a philosophical look at our everyday lives and examines the theory that we are all living a meaningless "nightmare of existence." Pessimistic? Sure, but Ligotti's erudite ruminations show that the greatest horrors in life are the real ones we see around us every day. Do you want a taste? Read the introduction here.

Anne Rice delivers to fans another tale of Prince Lestat with a new Vampire Chronicles story that fills in the rich back story of their favorite vampire. Here, Lestat recounts his past days and how he came to rule the vampire world as its prince through the formation of the Blood Communion. Lestat's tale shows how the vampires struggled to find their place in an unaccepting world and how Lestat was able to overcome the obstacles that stood in his way.

"Frey, Ovie, Juniper, and Runa are the Boneless Mercies―girls hired to kill quickly, quietly, and mercifully." So says the cover of Tucholke's new dark fantasy/horror hybrid aimed at young adults. As kick-butt as these heroines are, they may have had enough of fighting. When Frey learns of an unstoppable monster ravaging a nearby town, she sees that as their ticket to a better way of life. Marked by excellent worldbuilding, The Boneless Mercies offers a message of hope and change.