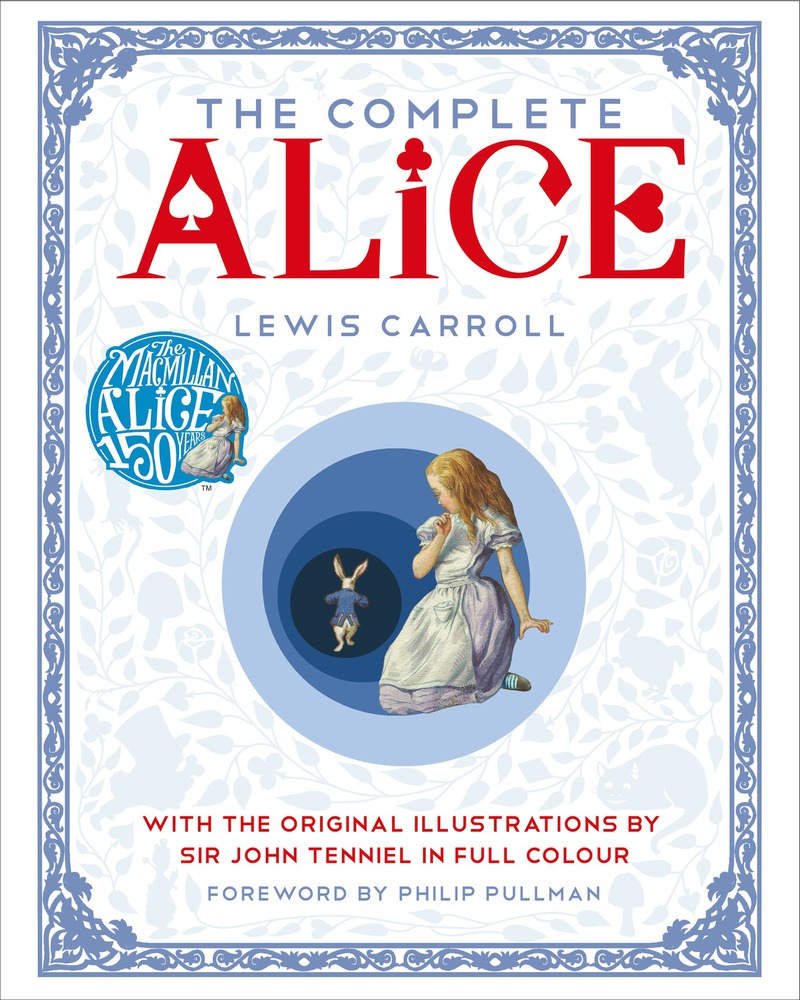 It’s not often that I write about so-called gift editions of children’s books, but I make an exception today to enthusiastically recommend The Complete Alice, which was released mid-September.

It was 150 years ago that Macmillan published the first edition of Lewis Carroll’s Alice’s Adventures in Wonderland. Macmillan celebrates the birthday this year with this anniversary edition, which bundles together into one handsomely designed volume that book and its successor, Through the Looking-Glass and What Alice Found There (1872), as well as the author’s preface to each book. Each book is unabridged. The Complete Alice also includes some other surprises, including a foreword written by author Philip Pullman and other writings from Carroll that, as the publisher notes, were historically printed with copies of the books. (These include “Christmas Greetings (From a Fairy to a Child),” written in 1867; “To all Child-readers of Alice’s Adventures in Wonderland,” a letter full of Christmas cheer that was written in 1872; and “An Easter Greeting to Every Child Who Loves ‘Alice,’” first published in an 1876 leaflet.)

Best of all, the book includes an episode called “The Wasp in a Wig,” which was pulled from Through the Looking-Glass but discovered in 1974 when the galley proofs for the book were auctioned at Sotheby’s. Carroll had intended for it to be placed near the end of chapter eight (right after the sentence “A very few steps brought her to the edge of the brook”), when the illustrator, John Tenniel, objected. He wrote, “A wasp in a wig is altogether beyond the appliances of Art,” and the episode was nixed before the first printing.

“And she was just going to spring over,” the episode begins, “when she heard a deep sigh, which seemed to come from the wood behind her.” The lengthy narrative, which Tenniel even once referred to as a “chapter” in a letter to Carroll, features “something like a very old man (only that his face was more like a wasp).”

At the close of the deleted scene, the Wasp remarks on Alice’s eyes and how they are close together, given that wasps’ eyes are located on the sides of their heads. In The Annotated Alice—first published in 1960 with various editions that followed—Martin Gardner notes that when he was 20, Tenniel lost his sight in one eye. Gardner wonders if perhaps the illustrator was offended by this remark from the Wasp. If so, Gardner writes, “it could have colored his attitude toward the episode.” For whatever reason he asked for the scene to be removed, it’s fascinating to read—and is certainly a necessary addition to any volume claiming to be “complete” about Alice.

(I must note to fellow fans of annotated books that an online search reveals to me that W. W. Norton & Company are releasing just next week the 150th Deluxe Anniversary Edition of Gardner’s book, which will include all kinds of wonderful, new additions. I’ve got a new entry now on my Christmas wish list.)

The Complete Alice closes with a detailed 18-page account of the books’ publication histories and its art, as well as a final publisher’s note. The publisher’s note will please die-hard fans of these two books, as well as illustration lovers everywhere, as it includes such attentive and detailed observations as:

The picture of the Cheshire Cat on page 91, originally an L-shaped image  floating around the text, was redesigned by Harry Theaker [the watercolor  artist who colored the illustrations in the 1911 edition of the book] as a  full-page colour plate. The same is true of three images in Through the Looking-Glass….These plates sit as close as possible to the position of original illustrations.

Speaking of those illustrations…I imagine that serious Alice fans have strong opinions about colorizing Tenniel’s original black and white artwork. The Complete Alice goes into detail at the book’s close about the Brothers Dalziel, the engravers who carved Tenniel’s images onto woodblocks (and then created the metal “electrotypes”) for the books’ artwork. Later, after the first book’s great success, Carroll and Tenniel collaborated with the publisher on the first color edition of the book, called The Nursery Alice. And in 1911, when new methods for printing in color were established, Macmillan published an edition of the first book with selected illustrations colored by Theaker.

The Complete Alice includes full-color illustrations throughout. This means some of the artwork was colored by Theaker in 1911; the rest were colored by Diz Wallis 20 years ago. “In both instances,” Macmillan notes, “the artists coloured proofs taken from the original woodblocks so that their images remained faithful to Tenniel’s original drawings. For this volume, The Complete Alice, all the illustrations have been reoriginated from the original Theaker and Wallis colourings which are kept in the Macmillan archive.”

This attention to detail and history is lovely to see. Pullman writes in his reverent foreword:

The point is, does it work? I think it works beautifully. The marvellous wit of Tenniel’s line is still there, and the colouring is done with delicacy and charm.…After all, playing cards are brightly coloured, and the Red Queen looks much more vivid in red than in grey.

Pullman also notes that the Alice books were the “origin of all later children’s literature”—and that he tends to agree. Certainly, children’s literature before Alice was moralizing. “In Alice,” he writes, “for the first time, we find a realistic child taking part in a story whose intention was entirely fun.”

It’s for this reason that my heart still belongs to Alice. Those of you who are with me may get as much enjoyment out of this rich, comprehensive volume as I do. It’s a rabbit hole you’ll gladly fall into.